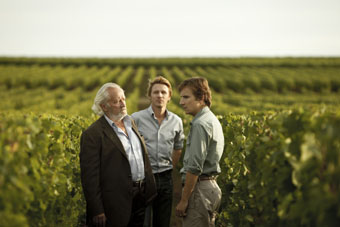 Paul de Marseul, owner of a prestigious vineyard in San Emilion, has a son named Martin who works with him on the family vineyard. Paul is an ambitious and passionate winemaker and the very thought that Martin might become his successor is almost unbearable to him. Paul would have loved to have a son with charisma and talent, a son worthy of his own ideals. When Philippe, the cellar master’s son, arrives, life at the vineyard changes. Paul is enthralled by the young man who embodies everything that Martin is not.

What follows is a chess match with four players which is carried out between two fathers and their sons under the helpless observation of the female family members. And at least one of the players has nothing to lose …