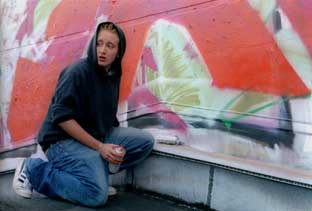 Danger and Kasper have the same problem. They’ve both been chucked out of their graffiti crews. When they meet, they decide to work on a graffiti project in honour of a deceased sprayer. Danger soon realizes that Kasper thinks she’s a man. But she doesn’t enlighten him. B-Boy Bülent loves break dancing while his fiancée Pepsi pesters him to take an interest in their wedding and her beloved wedding dress. Eventually, Pepsi delivers an ultimatum: break dancing or her.

Ozan and Madlen have just launched the music label „Toon Records“. Ozan promises Madlen to sign on undiscovered rappers and make recordings with them. Their visit to some rappers chilling it out in a cellar fails. Then Madlen has a great idea: She decides to give a party to lure the young men from their cellar. They start distributing flyers in the scene. And so all the main characters are united at Madlen’s and Ozan’s party in a ‚grand finale’.