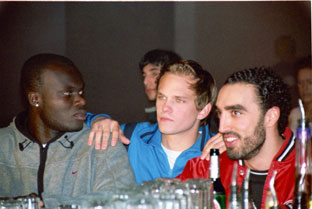 The four kings are Marwan, of Syrian descent, the Ghanian Oba Obovurum, named Kingsley, the Italian Lorenzo and Richard, the German. Their close friendship is followed here in a semi-documentary fashion. All four of them are kings, each in their own way. Marwan, the inofficial leader, represents power and team spirit, Kingsley liveliness and vitality, Richard is the quartet’s ailing problem child who accepts his lot with a grim sense of humour, and Lorenzo embodies freedom and the urge to find his own way in life.

Following a tragic accident that occurred in their childhood, the four swore everlasting friendship, to not respect any borders and never to mention death ever again. Those are the three rules they imposed on themselves. Now the royal four are grown up, scandalizing Berlin nightlife. Thanks to their friendship, they always escape unscathed. But then the four kings are confronted with the demands of the state on the one hand and their individual wishes and fates on the other hand. Both things put their friendship to a hard test …