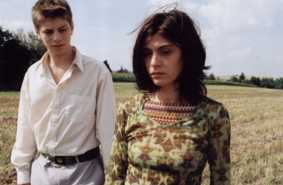 17-year-old Matthias is bored to death. Then his father starts having a go at him and he’s off. In a desolate station café in some foreign country Matthias becomes involved in a row: The beautiful waitress, Iva, is fed up with her bloke. On the spur of the moment she decides to take the boy to Berlin. She just carries him away – in a stolen car, with deafening music, ‚her‘ music. But very soon it’s clear that Iva has very little in common with quiet Matthias. But helpless as is his on his own, he sticks hard on her heels. Iva’s impetuous impulsiveness gets them into the weirdest situations …