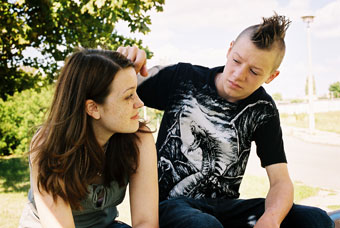 A small East German town. Three underdogs befriend one another: Richy (16) who is bullied at school, Tim (16) who just moved to town from the West with his parents, and the inscrutable loner Marco (18).

Richy admires the strong and reclusive Marco from afar. When the opportunity arises, he catches Marco’s attention by showing interest in his obsessions: occult games, martial arts and devil worship. As another trump, he introduces Marco to Tim, who comes from a wealthy family, but who he thinks is also looking for friends. The otherwise oh so cool Tim is also fascinated by the transcendental and together, the three young men get caught up in the idea of being Satan’s chosen few in the fight for world supremacy.

Fired up with their fantasies of power, they feel stronger and more important than ever before and experience a tempestuous peak in their friendship. But bit by bit, the three encounter boundaries in their own self-made world views, a fact that is particularly distressing to Marco, who has steadfastly decided to take control of his botched life through his contact with Satan. He develops an even more radical idea: they should move into Satan’s world, where they can take more action. Despite some initial doubt, the other two take this vision ever more seriously and are heading, beyond the attention of the adult world, toward a tragic goal.