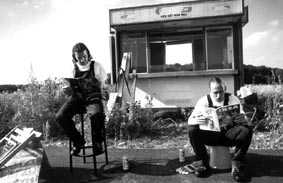 Mike and Alfred, both unemployed, pass the time of day drinking beer at street stalls and half-heartedly looking for jobs. Enter Rasto, an old buddy with amibitious business plans who offers them just the job, helping him transform a ruined snack booth he has just aquired into a blossoming refreshment kiosk. But Rasto turns out to be a dubious business partner, Mike is lackadaisical about work and Alfred, rather than working, falls in love with supermarket cashier Kati …