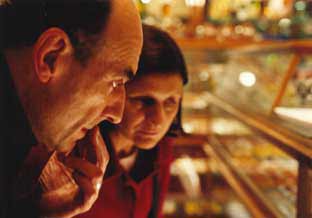 Jacobo’s in his sixties, and his life is his gloomy little stocking factory. Most of his time is spent grumbling orders to humble and loyal assistant Marta. Their relationship never went beyond quietly and efficiently working side by side.

From out of the blue, Jacobo’s brother Herman invites himself for a stay from Brasil. Herman also works in stocking manufacturing but with far more success than Jacobo. The two men have been rivals all their lives with Herman always winning out. For once, Jacobo wants to feel superior to his brother and asks Marta to pose as his wife during Herman’s stay. She agrees. From now on, the three experience complex emotional ups and downs and navigate between moments of awkwardness, subtle humour and melancholy.