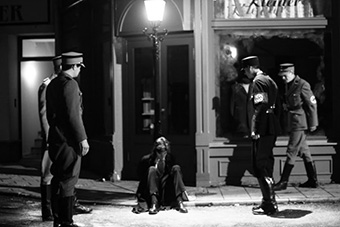 The film depicts violence from is most heinous side: disguised as friendliness. The perpetrator is always the one you least expect. An educated engineer turns into a thug, a nice high-school student conjures up fantasies of murder, and a good-natured otherwise Jewish-friendly man converts into a cold-blooded SS supporter.

The first episode tells the story of a woman who with female tolerance tries to maintain the appearances of a small, intact family. Her blinders, symbolized through a single consistent camera perspective, cannot be cast aside until her husband’s alcoholic escapades erupt before their son’s eyes.

Kilian, the protagonist of the second episode, seems like a normal young man. Nonetheless his peers treat him like an outcast. Years of bullying come to a brutal end during a conflict seminar at a youth hostel.

The last episode details in austere scenes the Jews’ systematic disfranchisement from 1933 until the November pogroms in 1938. The Jewish family Blumenfeld is fully aware of the severity of the situation. The SA, SS and Hitler Youth are marching the streets chanting their anti-Semitic propaganda. A wind of hate blows through Heidereutergasse. But Henryk Blumenfeld simply doesn’t want to believe that the situation is hopeless. We wants to remain in Germany and hopes for the return of human reason and the belief in the goodness in the world.