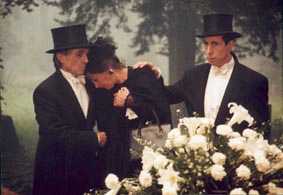 After nine years‘ tapdancing in a sleazy nightclub, the brothers Franz and Heinz are fired. When on top of that they lose their flat, they’re left with nothing but the taxedos they’re wearing. They roam through an absurd universe encountering awkward, funny and also grotesque situations.