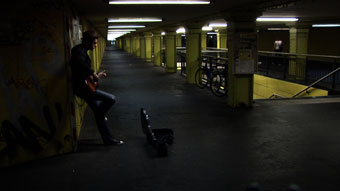 This is the story of a young couple: Nastja from Kiev and Dima from Tashkent. They came to Berlin together to try to forge a new life. Dima is a musician, Nastja is an actress. They live in a run-down apartment, which Dima seldom ever leaves. His only contact to the outside world is his brother Boris, who runs a shady car repair shop. Boris could get Dima a job, but Dima only wants to earn money with his music. Nastja managed to make contact through an acquaintance to a well-known theater director. Dima’s jealousy gets worse and worse, the longer the planned meeting with the director goes on …