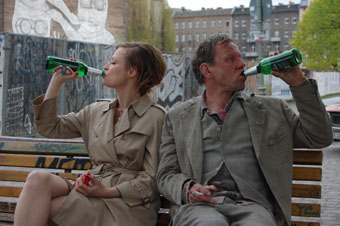 Johanna meets Georg. They sit on a bench together at night drinking beer. Everything is wonderful. High time, for they are both over thirty and live alone. When Johanna rings Georg’s doorbell the next afternoon, a completely different Georg opens the door. A Georg whom she is disturbing during a cleaning frenzy, a Georg who thinks life should no longer be treated as a hobby, a Georg who doesn’t drink alcohol, well, at least for the time being.

But maybe they would understand each other better if Johanna’s ex-boyfriend hadn’t shown up on her doorstep with his pregnant new girlfriend … And then there’s the bottle collector who knows a lot about love and is looking for things to recycle.