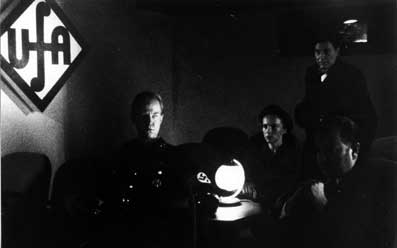 Reinhold Schünzel, who was born in Hamburg in 1888 and died in Munich in 1954, was one of the most versatile, productive and brilliant actors, writers, producers and directors in the German film industry. His best comedies as writer and director for Ufa in the mid-thirties – VIKTOR UND VIKTORIA (1933), DIE ENGLISCHE HEIRAT (1934), AMPHITRYON (1935), LAND DER LIEBE (1937) – are comparable to those of Ernst Lubitsch and Billy Wilder who had left for Hollywood earlier than Schünzel. He eventually fled there in autumn 1937.

Through 33 staged scenes, BEIM NÄCHSTEN KUSS KNALL ICH IHN NIEDER! (the title — “I’ll shoot him dead at the next kiss!” – is a quote from Schünzel’s film LAND DER LIEBE, 1937, made shortly before he emigrated) sketches the portrait of a courageous and stubborn artist who constantly fell between the changing political systems in an extremely absurd manner: the portrait of a gambler, an actor, a disorderly man in orderly times.