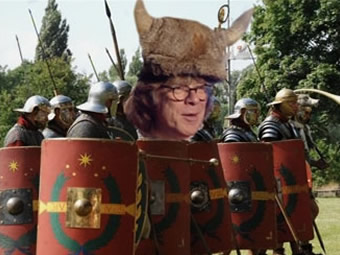 Principal Thormaelen from Oberhausen is also the chairman of the Varus Association. As is generally known, the Roman general Varus was defeated by Hermann the Cheruscan 2000 years ago in the early fall of 9 A.D. Thormaelen criticized the recent usual celebrations surrounding the 60th anniversary of the Federal Republic. This perspective seems to him to shorten Germany’s 2000 year history. Back then, in 9 A.D., there was a chance that Varus could have triumphed and we would have all become Romans. Would we have become more civilized as a result? What impact would this have had on upper-level Latin lessons?