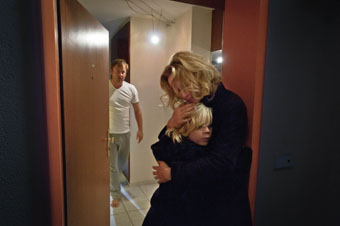 The film tells the story of a woman who tries with all of her feminine tolerance to save her family’s seemingly intact existence. She cannot rid herself of her blinders – symbolized with a single, continuous camera perspective – until one day when her drunken husband becomes violent in front of their son. But as is often the case in life, her comprehension of the situation comes too late and the viewer becomes witness to an uncompromising final conflict, one which is neither excusable with the impotence of predominant masculinity in a post-emancipated era nor by the cynicism of a blackout.