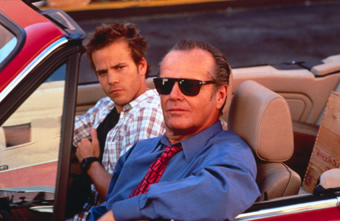 Alex Gates is a wine dealer to the wealthy denizens of the Florida Keys. His taste for luxury and extramarital affairs has consumed his profits and the finances of his embittered wife Suzanne and distanced his stepson Jason. To solve his financial problems, he decides on a burglary, aided by Victor, an ace British safecracker with a consumptive cough and a taste for the finer things in life.

The victims of the burglary are the employers of Alex’s current lover, Gabriela, a comely Cuban nanny, who is to unwittingly aid in the robbery; despite her abrupt dismissal, the theft goes as planned. But things come unglued when Alex attempts to leave for New York to sell the rocks, and Suzanne violently steps in to stop what she believes is another routine weekend of infidelity. Leaving the bludgeoned Alex out cold on the tiles, she hightails it to Key Largo with her son.

Alex and Victor track down the runaways but, in doing so, cause a car crash. The tragic accident leaves everyone attempting to get the upper hand in a game of double-crosses and reshuffled allegiances.