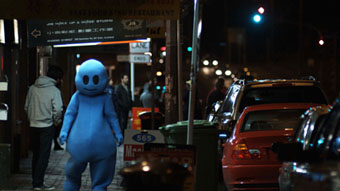 Blue is a hard-working waiter in an Asian restaurant, trying his best to keep his job. He always serves the food with a smiling face, but Blue is different than other people. He used to have a life working as a fluffy mascot on a children’s television program. Some people recognize him from the old days, but most people have forgotten him and don’t give him a second glance. One day though bad news arrives for him.