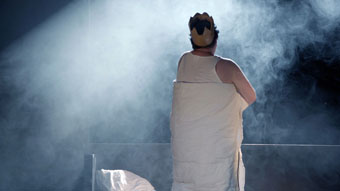 Jonas is an actor. After a successful night on the theater stage, he leaves the bright stage lights behind and takes off into the night. At a private party, he sees his ex-boyfriend Anton. Among the crowd, he tries to keep his cool and give off an air of cheerfulness. This is the first time they have exchanged words since the break-up. It quickly becomes obvious that Anton is not at all interested in the warming up the past. “Fasten your seat belts, it’s going to be a bumpy night,” Jonas exclaims to his crowd of friends before taking off again into the promising night.