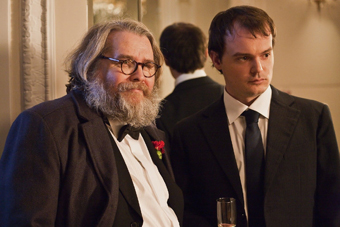 A wedding ceremony, the men’s room. Two men squeeze to fit into one of the small stalls. Walter and Markus, father and son. Markus timidly asks his laid-back father to take off his undershirt which is very visible under his shirt. “No one wears those anymore.” He feels embarrassed for his father. Walter is relaxed and does as Markus asks him to. But when his old father is standing in front of him – half-naked –, Markus realizes the absurdity of the situation and his own behavior.