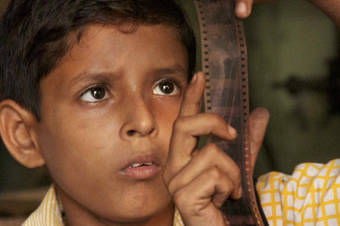 In a small port city in Bangladesh, seven-year-old Rakib discovers a 35mm projector in a cinema. At first, he is only allowed to spool the film reel, but then he learns how to operate the projector. Now he is ten and works as a projectionist. His single mother allows him to work in the cinema in the evenings but wants his older brother to take over his job. Rakib’s daily earnings are just enough to cover breakfast for the family. But he is not working for the money.

His father lives in the same neighborhood. In the cinema, Rakib seeks refuge from the conflicts between his parents and siblings but knows only too well that reality is waiting for him at home.