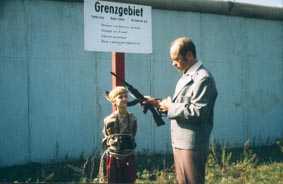 During the shooting of a feature film in winter, 2001, Christian Blank, a man playing the pit part of an East German border guard, goes beserk. For no apparent reason, he attacks one of the leading actors and tries to kill him. He is taken to the psychiatric ward of the Halberstadt hospital where a tired, but attractive psychiatrist treats him. She is soon fascinated by what she hears …