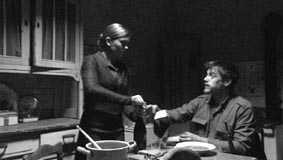 The last days of a war. A young soldier has deserted and is on the retreat. Exhausted, he chances upon a lonely house on enemy territory. It’s the home of Rebecca and her father. The fearful and obviously deranged old man tries in vain to drive him away. The deserter insists on spending the night in the house, not even the body of Rebecca’s fallen husband can deter him. Over a meagre supper, the soldier and Rebecca get friendly. But their dream turns into catastrophe …