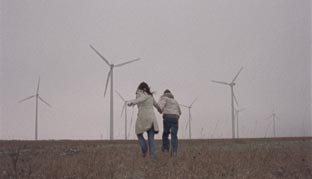 “You wouldn’t do a thing, you’d get lost because you’d realize it’s none of your business, and then you’d piss off. THAT’S what you’d do.” A few moments ago, Pierre was on a school trip with his class mates, now he’s standing on the car park of a motorway service staring after the bus, and he feels a little cold Pierre himself isn’t quite sure whether they forgot him or whether he wanted to be forgotten. Disoriented as he is, he meets Ellen and is fascinated by her superiority, her energy and boundlessness. Searching for whatever it is that might mean something to him, he does his best to be her match. A shared journey. A trip.