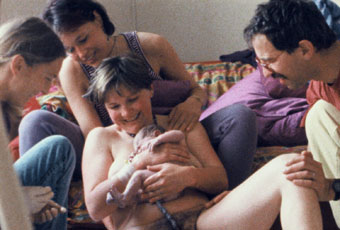 In this film the viewer witnesses the birth of a human being as an elementary, physical and sensual experience, participating intimately in the secret of nascent life. The film depicts how women hazard the unpredictable and inevitable, and how they balance their fears and insecurities with a trust in their own rhythm of letting go, biding their time, and reflecting quietly. Thus the film tells a story in which the important moments in a pregnancy are rendered tangible: the communication between the mother-to-be and her midwife, the affection and attachment between husband and wife, and lastly, one of the most intense moments in the life of a human being that is simultaneously bound with joy, pain, amazement and fear.