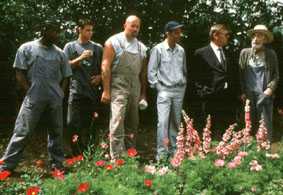 When Fergus, Colin’s ancient cell inmate, gives him as a Christmas present a packet of seeds, Colin reacts as sullen as ever. He is doing time for murder but refuses to talk about the crime to anyone. A few months later, however, it’s precisely the blossoms from these seeds that provoke Colin to attack another inmate who viciously treads them into the dirt. The progressive Governor, his attention drawn to Colin by this incident, suggests he take part in a gardening project of flamboyant.