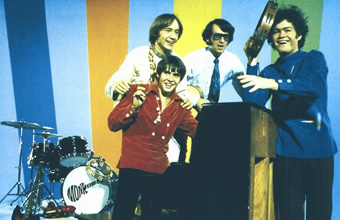 The Monkees take a trip through psychedelia, spoofing The Beatles’ films, and as they say at the outset, “We hope you like our story/Although there isn’t one/That is to say, there’s many/That way, there is more fun!”

BACKGROUND: The band The Monkees were assembled by Bob Rafelson and Bert Schneider in 1965/66 as tongue-in-cheek American answer to The Beatles; an ad was run to cast the band, initially for a TV serial that run successfully for a number of years. But The Monkees also become famous in their own right. Their introductory song was:

Hey, hey, we are The Monkees
You know we love to please
A manufactured image
With no philosophies.
[…]
You say we’re manufactured.
To that we all agree.
So make your choice and we’ll rejoice
in never being free!