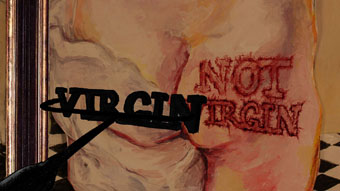 Deflowering is a once in a lifetime event that cannot be repeated. Virginity is thus considered a gift, award, barrier or taboo. But it has meaning only among humans. We invented and developed the concept and propagate it through our cultures, religions, legal institutions, through art and scientific work. And we have made it into a patriarchal instrument that defines and controls the social role of women, even today.