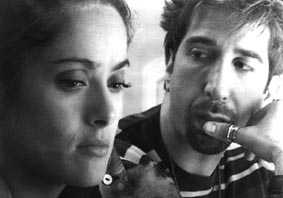 The film is about a film crew who are staying and shooting in Venice, filming a version of “The Duchess of Malfi”, the tragedy written by Shakespeare’s contemporary, John Webster. The producer is involved in an attempted murder of the director. He takes over the film as well as the leading lady. It also becomes clear that the staff of the hotel are vampires who regularly help themselves to the guests. As the story moves on, the three strands of the film become one.