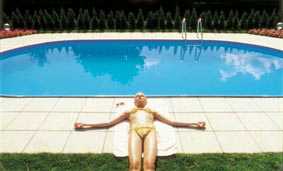 It is a hot and stifling weekend in the suburbs of Vienna somewhere between the autobahn and the exit roads, the hypermarkets and new housing estates. During these salad days (“Hundstage” in German), six stories unfold, all interwoven, revealing a world of disillusion and lonely souls. While the days are lazy and melancholic, spent lounging in underpants and bikinis, the nights, steeped in alcohol, sex and songs unleash a fury of violence and raw emotions.