I AM FROM NOWHERE 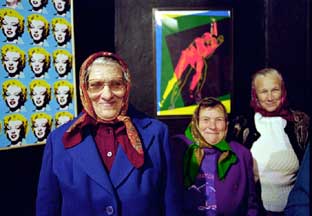 Since 1952, innumerable films, documentaries and television reports have been made about the small East-Slovakian village of Miková. It was the village – population: 150 – that Andy Warhol’s family left when they emigrated to the USA in 1921. The film focusses on the results of the media’s obsession with the village: Now, the inhabitants themselves dream about their 15 minutes of fame; their longings reflect universal desires and hopes.