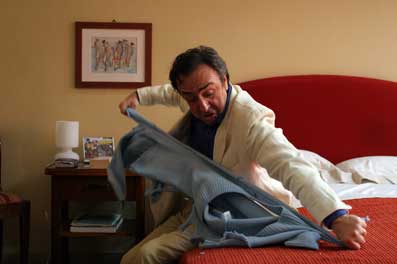 Bankrupt in his professional and personal life, Z-grade movie producer Bruno Bonomo – responsible in the past for such evocatively-titled offerings as MOCASSIN ASSASSINS and MACISTE VERSUS FREUD – is finding it impossible to raise the finance for his latest project. Entangled in debts and his own weaknesses, struggling with a capsizing marriage and his wayward kids, Bruno is going under. By chance, he meets a young director who gives him her script, THE CAIMAN. At first Bruno takes it for a half-hearted thriller; a more careful – if belated – reading reveals a film about Berlusconi.