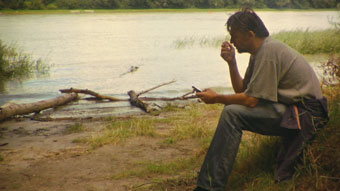 Hans lives in a small town near Vienna. A taxi driver by profession, he is married and has one son. But Hans also has a secret, one which could tear his family apart. There is only one person he can turn to: a woman from the past.

At first, the film shows a petty bourgeois life: family stress during the preparation for a birthday party, the invited guests arriving too early, the beginning of the party. But the man celebrating his 50th birthday doesn’t show up at all. He gets out of his car and strolls through the forest. When he finally comes back home, there is nothing more to say. So he runs away. To save anything that is left.