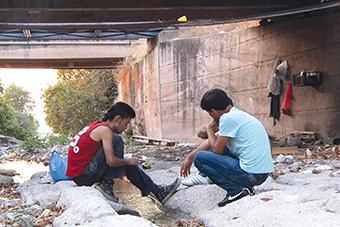 A refugee has to apply for asylum in the country in which they first set foot on European soil. That is a well-established fact. Less well-established is the fact that for 90% of all refugees, the Aegean Sea is the gateway to Europe. What does that mean for Greece? Capitulation: the Greek asylum system is completely swamped, both by sheer numbers and financially, and collapsed years ago. No one can stay in Greece, but no one can leave, either: the Greek authorities exercise extreme severity toward refugees who try to leave the country. That’s what Europe wants and Europe is willing to accept dead bodies …

The film tells the very personal stories of three young Afghan refugees, Hossein, Reza and Kaka, who for the last three years have been trying to break this vicious circle. They met in a refugee camp on the island of Lesbos. Hossein, Reza and Kaka pursue the three paths available (or not) to refugees once they have conquered the outer borders of “Fortress Europe”: success, hope and resignation.