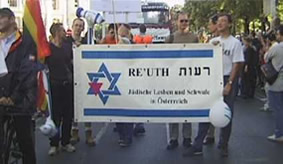 19/06/1999, in the centre of Vienna: two very distinct parades took place simultaneously on the same street. One was a policemen`s parade; the other a celebration of gay pride. Because the policemen didn`t want to march hand in hand with the Gay Movement, a typical Austrian solution was found: while the gays marched clockwise, the policemen marched counter-clockwise.