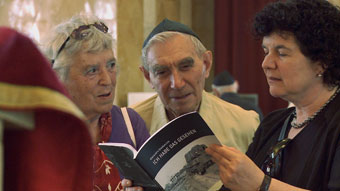 They come from Russia. They are Jews. They live in Germany. Their religion was prohibited in the former Soviet Union. Their culture was banned. When the borders were opened 19 years ago, they set off. Young and old, whole villages, half the population of towns. Hundreds of thousands emigrated. To the West. To Israel. To Germany. For a short time, the Jewish community in Germany was the fastest growing worldwide. The 9th of May is a special day for them. The Day of Liberation. The Day of Victory. The veterans put on their medals and talk about their battle against Nazi Germany. And the young ones have tears in their eyes. And the band is playing “Mazel Tov”, congratulations that you did fight, that you are here. The history of the Jewish fighters in the Soviet Army is one of repression, outrageous and unbelievable at the same time. The old people in the film talk about this. With dignity, without hatred, full of wisdom.