MOUNTED BY THE GODS 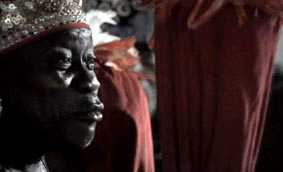 Travelling through Benin in West Africa in 1991, the Swiss photographer Alberto Venzago discoverd a voodoo monastery. A priest named Mahounon consulted an oracle and told him events from his childhood he could know nothing about. Mahounon became Alberto‘s guide, mentor and friend on a ten years‘ journey into the mysterious world of voodoo. The film recounts this journey.