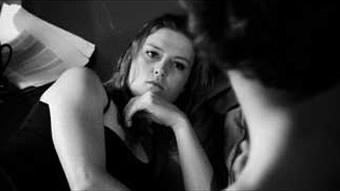 In the almost unbearable heat of a summer in the city, two people are reunited in an apartment – Stefan and Susanne. Both share a common past, one which Susanne left behind her when she fled to the city to start a new life. It wasn’t only her mute father that she wanted to escape from, but also her feelings for Stefan, who is deaf. While the heat of the big city rushes by outside, Stefan and Susanne communicate the only way they can: through silence.