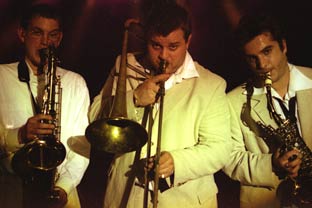 One of Henri’s sax solos, and the audience goes wild. That’s just what his musical colleagues Paul and Stucki are hoping for: If this evening’s session is a success, the three wind players will go on tour with `Chevy an his Funk Decade`! Unfortunately, though, Henri’s not concentrating on the high notes but rather on pretty Jana. If he doesn’t want to remain single for the rest of his life, he’ll finally have to learn to be as uninhibited in matters of love as in matters of music …