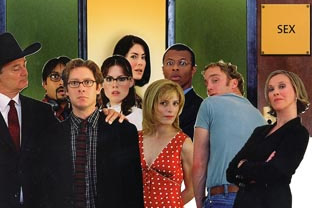 Dan and Melinda, a young couple from Idaho, seek help from a female marriage counsellor, thrice-divorced Dr. Paige, and a clinically depressed depression expert, Dr. Klink who combine in unorthodox ways to solve their marital problems. While Dan “accidentally” had sex with a waitress in his truck, he can’t have an erection with his wife.

Referred to Dr. Klink for “efficient” treatment, Melinda explains in great salacious detail her oral experiments at getting a rise out of “Mr Happy” (the name Dan has given to his penis). Dr. Klink refuses to take Melinda on as a patient but then chases after her, catches her up in the elevator where they spontaneously engage in sex between floors …