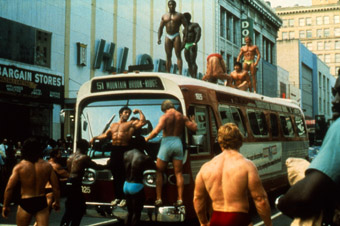 With both his parents killed in an accident, Craig Blake mainly hangs out at his family’s mansion until he decides to do something different with his future and starts doing business with some low-life real estate developers. Soon he’s given the task to buy out the small Olympic Spa Gym, owned by Thor Erickson, which the developers want to demolish and replace with a high-rise office block. At the gym, Craig meets the receptionist, Mary Tate, and Joe Santo, an Austrian Mr. Universe hopeful.

Mary Tate had been Joe Santo’s girlfriend but now starts to get very friendly with Craig. Craig, in turn, becomes so fond of the spa that he decides against the business deal and rather becomes involved in the spa business, infuriating the developers who have the place ransacked.

Intent on buying the gym, they then contact Erickson and try bribing him with drugs und prostitutes into selling the place. While Craig watches Joe Santo taking part in the Mr. Universe competition, a totally drugged Erickson brutally rapes Mary Tate. When Craig’s called to the scene, a fight ensues between him and Erickson and Craig. Back at the competition venue, though, rumour has it that Thor has taken off with the prize money, which the body builders won’t have …