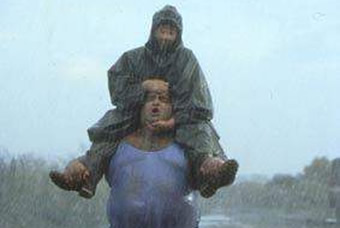 Boasting 200 kilogrammes live weight, Bruno Nestroy is not only the fattest man of all Riesa, but presumably also the loneliest. He’s happiest when he can coop up in his flat, stuff himself with crisps and curried meat balls and pretend he’s not in when the bailiffs ring the doorbell – the former gatekeeper has been out of work for two months now. And on top of all that, his chum Kalle has been fired yet again, for the third time this year.

But Kalle has a brilliant idea how to get out of their fix: The first Sumo World Championship outside of Japan, offering 50,000 Marks to the lucky winner, will be held in the Saxonian dump Riesa (“Twinned with Chernobyl”) of all places. And who would make a better sumo wrestler than Bruno?