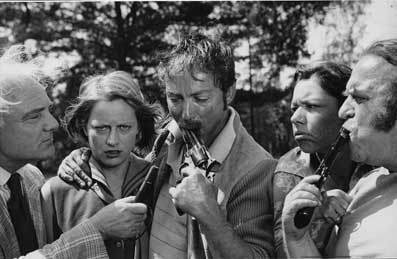 As soon as the ex-gangsters Bössler and Jablo have been granted asylum in Rassau City – the one now owns a furniture store, the other a church -, they engage their energies in the cleansing of Germany. Only after they’ve done in a Polish family and a West German social worker on the “Asylumtrain Rassau” do the police finally show up in Rassau and become involved in a whirlwind of events: A motor biker loses his face to Helmut Kohl. The management of a refugee centre start thinking of Treblinka. A parson violates a Thai woman. The joint past of all people involved hits back relentlessly: GLADBECK. When eventually the Nazis, the faith healer and the minister arrive, Germany reveals her true face …