THE KING OF MARVIN GARDENS 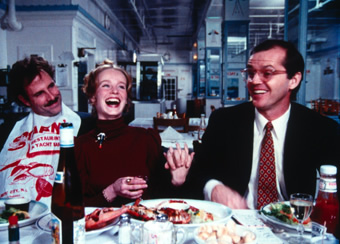 Jason Staebler is making his last go for the big break. He has convinced himself that he can negotiate a deal to take over an island off the coast of Hawaii and establish it as a gambling resort. He summons his brother, the tentative, unsure David who makes his living as an all-night FM talk jockey in Philadelphia, to meet him in Atlantic City and help him finalize the deal and, once on Hawaii, to take over the entertainment.

Waiting around in a plush but decadent hotel suite for the dream to materialize, Jason tries to renew contact with his brother. Sally, a fading ex-beauty queen, and her attractive stepdaughter Jessica are along to perk up his spirits. However, the four very different personalities soon clash under the anxious tension of waiting.

Then it transpires that Jason is only serving as a front man for a black syndicate that makes its money in drugs, and with his bid for the island, he has seriously annoyed the black rackets boss and moneyman in town …