THE PIANO TUNER OF EARTHQUAKES 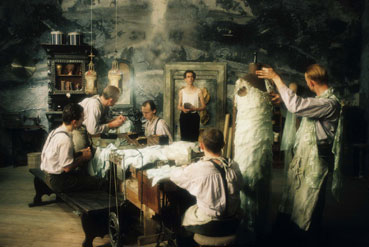 On the evening before her wedding, opera singer Malvina is mysteriously killed by Dr. Emmanuel Droz, who loves her obsessively. A “brain doctor” and inventor who has unlocked the secrets of rejuvenation, Droz steals away with the lifeless body before anyone can react – particularly her fiancé, Adolfo Blin.

Far off at his secluded residence, Villa Azucena, Droz brings Malvina back to life, but only to keep her in a state of resigned lifelessness. Night after night, he rehearses an opera with her, one he’s written himself. Droz has designed an artistically elaborate stage, and it’s here that he intends, at the peak of a one-time-only performance, to pour his own life – as the hero – into hers. It’s in this way, so his hypothesis goes, that he will be united with Malvina in an eternal embrace and also take his revenge on the opera world which has so far rejected his musical creations …