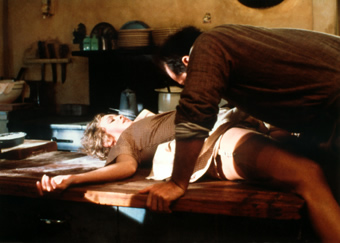 Frank, a drifter, stops at a diner in rural California for a meal and ends up working there. The diner is operated by a young, beautiful woman, Cora, and her much older husband, Nick. Frank and Cora have an affair. Cora is unhappy with her lot, married to a man she does not love and working at a diner she would like to improve. She and Frank decide to murder Nick in order to start a new life together without her losing the diner. Their first attempt at the murder fails, but eventually they succeed.

The local prosecutor suspects what has actually occurred, but doesn’t have enough evidence to prove it. His tactic to turn Cora and Frank on one another by suing just Cora for the crime seems to work initially, but with a clever ploy from her lawyer she is ultimately acquitted.

Frank and Cora eventually patch their passionate relationship together and plan for a future together. But then they have a car accident.