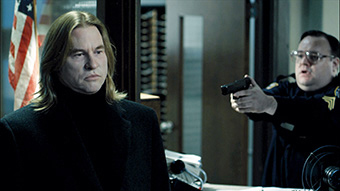 On Christmas Eve in a small town, a stranger walks into the police station and confesses to Desk Sergeant Gulloy that he has murdered six people. Detective Alexander Black arrests the man, but fails to identify him since the stranger does not have fingerprints and refuses to give any other name than “Mr Nobody”. When a short while later one of the deputies dies in the police station under mysterious circumstances, the Christmas mood is gone for good. Eventually Deputy Hawkins recalls that the stranger resembles the long-haired drifter they had arrested a year ago when Detective Black’s daughter had vanished. And they remember how viciously they tortured him and the threats they issued to him … Meanwhile, Mr Nobody continues whistling the “Lacrimosa” from Mozart’s Requiem …