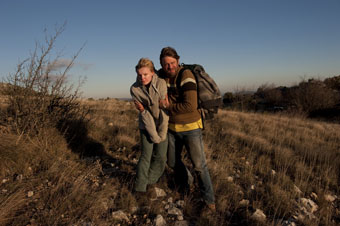 Fifteen-year-old Adele wants to die. After her brother’s death, everything around her feels strange and distant. The only thing that remains is a deep sadness in a dismal and laborious life. Timo (43) is on the run. Imprisoned eight years ago for murder, he managed to escape from jail. Injured and exhausted, he finds shelter at Adele’s parents’ remote farm.

When Adele discovers the fugitive, she makes him an audacious but sinister offer: she will help him to escape, but as soon as he is in safety, Timo must kill her. Desperate, Timo agrees to the morbid deal. Suspicion and mistrust shape their journey, which leads them to Marseille. The boundaries between perpetrator and victim blur. The brash Timo can hardly stand the closeness of the girl, but Adele reminds him incessantly of his abstruse obligation. The more arduous the circumstances become, the more this odd couple is forced to trust and depend on one another, in order to reach their disparate goals.