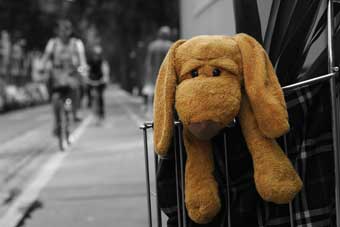 Garance has just lost her Wawa. It’s going to be picked up, rolled around, transported, thrown away, carted off, dragged off, snatched up, shot, smashed, trampled, given away, pushed around, stolen, soiled, forgotten, chewed on, slapped, crushed, banged up, and found again. This is the story of the unfortunate trip of a stuffed dog through the streets of Paris.