WHERE THE TRUTH LIES 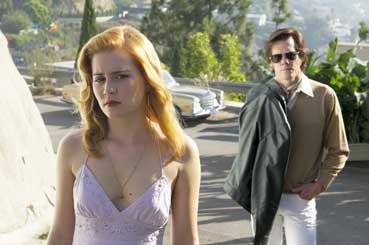 In the 50’s, Lanny Morris and Vince Collins are the most beloved entertainers in America. A classic duo — Lanny is the manic comedian, while Vince is his cool and collected straight man – they know how to make audiences roar with laughter at their jokes, or shed tears at one of their famous telethons. They are at the top of their game, wealthy, powerful, and enormously popular, when inexplicably, a dead beauty turns up in their hotel suite. Their reputations are sullied but, thanks to rock-solid alibis, neither is charged with the crime. Their partnership, on the other hand, is destroyed. Lanny and Vince manage to salvage separate careers, but years pass with neither speaking to the other, or to anyone else, about the girl’s death. The reason for the break-up of Morris and Collins becomes one of show business’ greatest mysteries.

Fifteen years later, up and coming writer Karen O’Connor decides to turn this cold case into a hot story. She wins a lucrative deal to write an exposé about Morris and Collins and begins to ferret out the facts behind this fabled showbiz split. Her investigation leads to involvement, sexual and emotional, with both Lanny and Vince. But the more invested Karen becomes in the men and their story, the harder it is for her to accept disturbing truths about them.