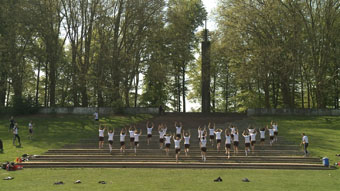 Women and soccer. Despite growing interest, soccer playing women are still sniggered at, at the very least. A lot of men are still convinced that women cannot play soccer and even some highly respected female film colleagues still think that women’s soccer is boring ball dribble, lacking any thrill!

The film captures the special situations and casts a precise view on the women, the sport, the tournaments and the reflection in the public and published opinion. It portraits, in an entertaining manner, the players who have to give up a lot for the sport and their dreams and who, besides their passion, have to deal with the questions of existential security in a different way than their male colleagues. It also casts a bright light on the World Cup in their own country, the emotions, the hopes, but also the disappointments.

As the legendary Herbert Zimmermann said in 1954: “Even soccer amateurs have to have a heart…”