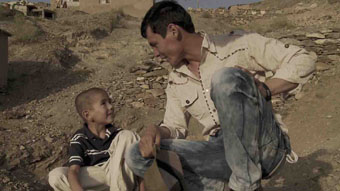 “Five meters deep, two meters wide – 10 square meters. At some point, it starts to feel like home.” Daniel S., Captain of the German field camp in Kunduz/Afghanistan, speaks almost lovingly of his container-like housing. Daniel S. stands behind what he does. “There are things here that are right, and things that are wrong. And I think we are the good guys.” He knows that a civilian has difficulties understanding that. After a six-month deployment, he is looking forward to going home to Germany, where his wife and two small children are waiting for him. But he will return to Afghanistan, for “this here is real life.”

Three kilometres away in an Afghan military camp, Lieutenant Mehdi M. also gives us some private insight. He shows us the scars of tattoos which have been removed: “My initials and those of someone I loved. I married someone else, though, because in Afghanistan traditions reign supreme.” Since his childhood, he wanted to be in the military. And his family supported him. Today, however, they view his mission with mixed feelings. He doesn’t see any difference between the Afghan and German soldiers: “We are from different countries, but we are fulfilling the same duties.” His family, wife and two children live in Kabul. He, too, can return home just every four or five months.

VIRGIN TALESWHERE’S THE BEER AND WHEN DO WE GET PAID